RSS
← Birthday For One
It’s About Them, Not You →

The Weight of Depression 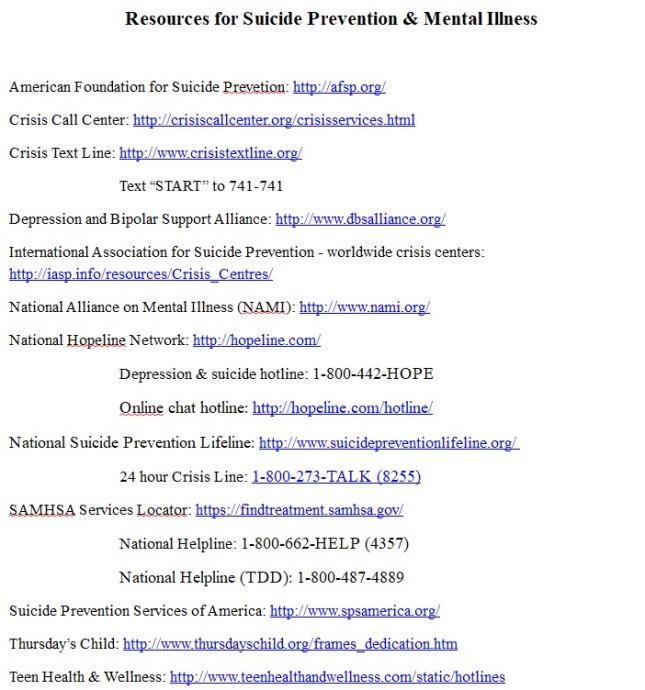 Giving you resources up front to use for yourself or to help a loved one.

Suicide, along with depression, is still greatly misunderstood, particularly by those who have never experienced the pain of depression and the thoughts of suicide that sometimes accompanies it. Everyone has their own story. Everyone experiences it in different ways. It doesn’t know color or socioeconomic status. It can happen to anyone at any time. My last book is about this. About showing how the stigma of mental illness affects those diagnosed and those around them. About how deep the pain runs and the internal struggles wear you down just so you can appear normal and not make others feel uncomfortable around you.

This isn’t just about the news of Chester Bennington’s suicide yesterday. It’s about my history and the loss of my friend and fellow author, Sonya Craig, two weeks ago.

Much of my teenage years and young adulthood was clouded by depression. I destroyed journals that weren’t even filled after going back to read them and hating how dark and full of anguish they were. I didn’t want to remember that. So, I’d start a new one only to destroy that one too. After a while, I stopped journaling altogether before graduating high school. The only writings to survive those years are poetry and prose. None of them detailing the one day I sat in my room, crushed by the weight the prison of my mind created. The walls were closing in around me and I only saw one escape – I was ready for it. However, when I moved to take action I couldn’t move. It was like a giant hand came down and held me immobile. I cried for a good long time.

I call it divine intervention. You can call it what you want. But that moment was the moment I knew I could survive. That at some point there would be an end to the internal torment.

For many, there is no light at the end of the tunnel. They are mired in a dark void.

So it is for those who attempt and/or complete suicide.

To those of us left behind with no understanding of what they were going through, it seems grossly unfair, selfish. Why don’t they think about everything they have to live for?

Because in the moment, all we see that we have to live for is an unending and unbearable pain. There is nothing good that we can see to make us change our mind and to put down the knife, or the pills, or the gun, or the rope.

Depression and suicide are first and foremost about the person living with it and it is unfair of everyone else to expect them to act selflessly when so many refuse to try to understand what depression is like.

There are days where just getting out of bed is an enormous feat. Once we do that, we spend the rest of the day pretending we’re okay. Putting on fake smiles and acting interested in the conversation someone roped us into. It’s exhausting. But we do it because we don’t want to hear the shitty things people say. You have all the money in the world, you don’t have a reason to be depressed. Just pray and give it to God. You’re on medication? It’s all a scam by Big Pharma to make more money.

This is why many remain quiet about their innermost thoughts. Had I even attempted suicide, everyone would’ve been shocked. I didn’t present with any of the behaviors you’re told to look for. I didn’t even think to write a note. Again, my focus was on ending the pain. 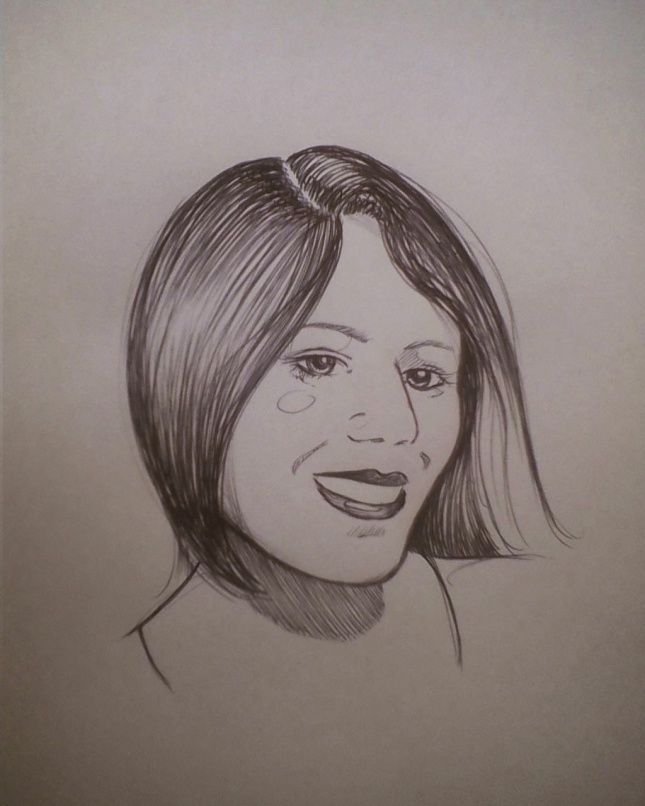 Sonya took a picture of mine and sketched it. She was a talented illustrator.

Sonya never presented with any of the behaviors either. She never spoke to me about wanting to hurt herself but she never hid the fact that depression was clouding her life either. I had just talked to her the day before and not even a hint. It is a much different experience from my cousin’s suicide almost 5 years ago in which there were prior attempts and he and I did have conversations about his depression and how to access services he couldn’t afford because he didn’t have insurance. Looking back at my last interaction with Sonya, I’m glad I let her know how much I loved her and how much I valued her in my life.

For the first time in 13 years, I stuffed my grief and busied myself with other things. I normally allow myself time to grieve and feel those feelings. I think the shock took me by surprise and I just didn’t want to deal with it. You see, Sonya was a bright spot for all of us. That’s the one recurring trait that we keep saying about her. She was always seeking ways to brighten someone else’s day and making sure to check in with anyone she knew was having a difficult time. The first time I met her on Twitter, she sent me a rather enthusiastic tweet that she was following me because a mutual friend said so. I was rather flattered by her enthusiasm because she was a stranger to me and strangers never approach me with that much enthusiasm. It wasn’t long after that that we were joking around and she was introducing me to other authors who all became part of my tribe. I once credited the mutual friend for having the tribe but in reality, it was Sonya. She had a way of bringing us all together.

Just this week, more memories of her have hit me hard. I was cleaning out my inbox and found an email from her, just a few months old, of a post she asked me to look over for her before she put it up on her blog. It was about how she was feeling about the state of our country and how the bigotry and hatred were making her sad because she felt we were better than that. She never posted it and I wish she had because it was a peek into her beautiful soul.

It was after reading David Draiman’s Facebook post on Chester Bennington yesterday that the dam broke open for me. It allowed me to break out of the numbness and start feeling again. 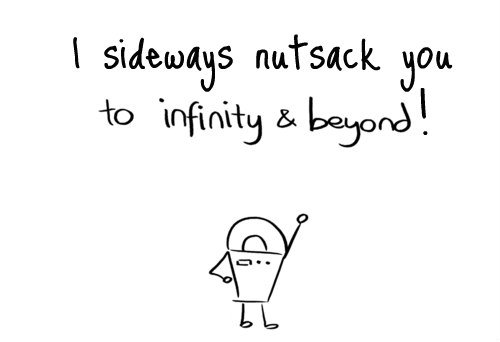 Sonya drew this for me when we were having a back and forth on who loved the other most.

I miss her so much. I miss the animal videos she shared in hopes they would bring a smile to someone’s face who really needed it. I miss her big heart. I miss her sideways nutsacks <3. I miss the epic virtual hugs we’d have and I’m sad that I’ll never get to give her one in person. I won’t get to talk about the new Star Trek show with her when it starts. I won’t get an autographed copy of her book when it’s released.

Sonya, if you’re reading this, “I don’t wike it” but I get it. I’ve been there. I hope you have the relief you sought and that you are dancing to Beyonce. Don’t worry about me. “I’m okay!”

Posted by Debi Smith on July 21, 2017 in Uncategorized

← Birthday For One
It’s About Them, Not You →

4 responses to “The Weight of Depression”