The Downward Spiral: Chapter One 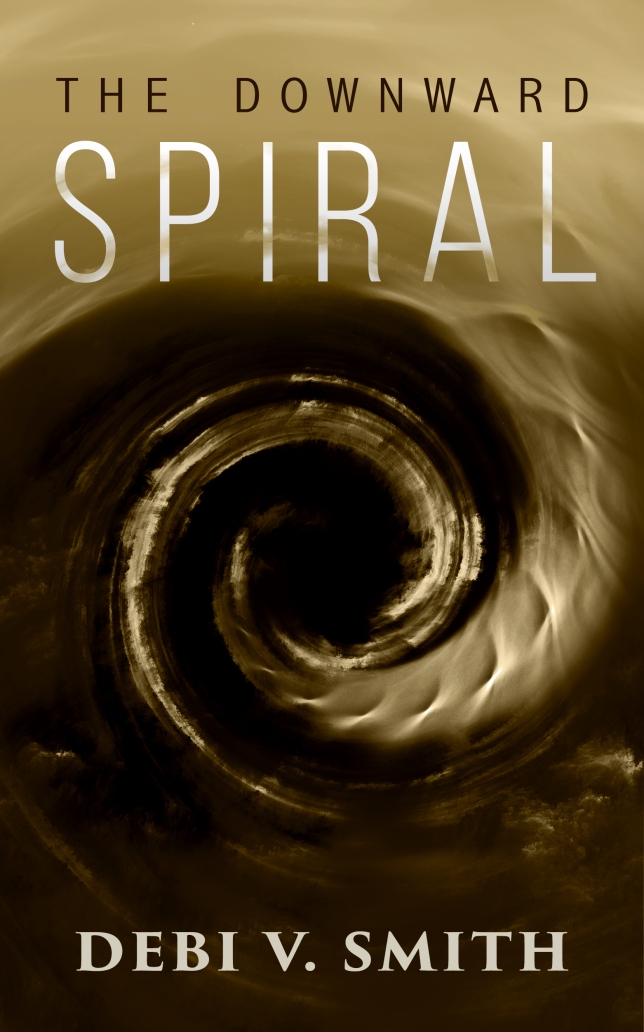 The blank canvas taunted him, chided him. Whatever you do to me will amount to nothing. You can paint whatever you want, no one will want me. I’ll sit in the corner of this studio collecting dust until you paint over worthless little ol’ me.

He shut his eyes, listening to Seether—willing the music to drown out the negativity. He pursed his lips, raising his hand to strike.

You’re no artist. You’re a waste of oxygen.

He slashed the brush across the canvas and then diagonally upward, putting his whole body into it like a taiko drummer. He continued the wild strokes until the brush emptied of color. After dropping the brush in the black jar on the table next to him, he pulled one out of a jar of crimson paint. He attacked the canvas again.

Stepping back, he surveyed his work. A fucking trainwreck.

He threw the brush at the canvas in frustration, it hit with a dull thud. The brush fell to the floor as he dropped into his chair, spent physically and emotionally.

Kyra tossed her keys on the table in the entry, dumped her briefcase underneath, and thumbed through the mail. The house was quiet, absent the usual rock music playing and aromas of food cooking in the kitchen.

She kicked off her black patent leather pumps and climbed the stairs, entering the first room on her right. Three of the walls were set with large windows, allowing natural light to flood the room during the day.

Kyle was slumped in a chair, arms hanging at his side with a glass of red wine in his hand. His short burnt sienna hair was messy and his jeans and white t-shirt were spattered with paint. An easel with a large canvas, full of angry, dark brush strokes was in front of him.

“Hey, Ky,” Kyra said, leaning against the doorjamb with her arms over her chest.

He startled in his seat, almost spilling his wine, and then glanced at her. “Hey, Kyr. I didn’t hear you.”

“What’s up with that?” She gestured to the canvas with her chin. “It looks like roadkill.”

“Elisha broke up with me again.” He took a sip of wine.

“What was it this time?” She’d lost count of how many times Elisha broke up with him, and couldn’t keep track of the myriad reasons she gave when she did so.

“I don’t pay enough attention to her.”

“You don’t pay enough attention to me either,” she joked, smiling. “Maybe I should breakup with you too.”

“You couldn’t if you tried.” He chuckled. “We share too much DNA.”

“Lucky for you.” She paused with a slight smile. “I’m guessing you didn’t cook dinner.”

“Order some Chinese while I change and pay the bills.”

“Shrimp with snow peas. And pour me a glass,” she said, nodding at the wine. “No reason for you to be drinking alone.”

“You bet.” He grabbed the phone off the table next to him.

Kyra returned downstairs to the master bedroom, stripping out of her black pencil skirt and ivory blouse. She donned a pair of black yoga pants and a lavender tunic sweater—it was almost spring in San Diego and she got chilly at night—then pulled her hair into a ponytail. She sat at the desk in her office as her twin brought her a glass of Tempranillo.

They sat on the floor in front of the coffee table with their white takeout boxes and glasses of wine, watching a rerun of Game of Thrones. Kyle slouched and peered into his box of Beef Broccoli while Kyra picked out a snow pea pod with chopsticks from her box.

“Are you going to try to get her back?” she asked.

She laughed. “If I had a dollar for every time you said that.”

She chewed her food, pondering his declaration. She had never been fond of Elisha, but she never voiced that to Kyle. He needed a supportive sister, not another person to question his choices. She wouldn’t argue with him focusing on his art though. Anything to keep him out of the clutches of his ex.

“The usual fun day of contracts and meetings.” She winked at him. She was a lawyer for a tech company, focusing on their contracts. She didn’t do litigation—it wasn’t her thing. Not every lawyer belonged in a courtroom. She preferred writing and pouring over legalese. Analyzing suited her.

He cracked a smile and snickered. “Want to go to the museum with me this weekend? They have a Picasso exhibit for a few weeks I want to see.”

“Sure.” She settled against the sofa, cradling the wine glass in her hand with the stem between her middle and ring fingers.

Kyle lifted his glass, stopping before taking a drink. “Do you think I’ll meet someone else?”

“Only if you don’t hide in your studio.” She sipped the Tempranillo, pressing her tongue to the roof of her mouth.

He refilled his glass and then hers. They sat in comfortable silence, nursing the wine and watching Tyrion’s trial.

Kyle let out a deep sigh and poured another glass, emptying the bottle. “Do you want more?” he asked Kyra. “I can open another bottle.”

She watched him stroll to the wine rack in the dining room. She knew he would be moody. After the other breakups, he hid in the studio most of his waking hours and then drank himself to sleep when he was done. This would be no different.

Being each other’s twin for the last thirty years was never easy. Where Kyle was emotional and given to temperamental outbursts, Kyra was rational and thought everything through before acting. Maybe it was what made him a good artist and her a good lawyer.

But others expected them to be the same, and that would never happen.

Kyle gazed at his twin as she sipped her wine. They looked enough alike that if someone was paying attention, they’d notice the familial resemblance in the shape of their oval faces and long noses. But no one ever guessed they were twins because they noticed the differences first—her darker hair and her light hazel eyes compared to his light brown eyes.

He slid his arm around her, resting his head on hers.

How can I have a relationship while working on my art? Will other women feel the same as Elisha about me and my work? Or will they be more respectful of my time and process?

His ex didn’t like his intense focus when he was into his work. It’s not that he forgot about her, it’s that he was driven to see his vision take form. Once the idea was in his head he had to get it on canvas, otherwise he ruminated over it.

Posted by Debi Smith on September 7, 2016 in Uncategorized

Writing What I Know

My character brainstorming and how each one relates to Sara.

The question I’m asked most often from readers is this: Is Family Ties based on personal experience?

I’m not Sara. My parents aren’t Simon and Tibby. The Jerichos and Jason are completely made up.

Have you heard the saying, write what you know? Robin Cook was a doctor. He knows medicine and writes medical thrillers.

I worked in the mental health field for twelve and a half years. I spent ten and a half years working with boys, mostly teenagers, but some as young as three. Most of them were physically/sexually/emotionally abused/neglected by one or more family members. I did direct care work at first. I was with them from after school until bedtime and on weekends. I knew their histories and their pain, was forced to physically restrain them when they were in danger of hurting themselves or others, and sat with them as they cried and cried about how unfair life was.

I started the first draft of Family Ties while doing direct care work, because I needed somewhere to put their stories and the stress of carrying them with me.

I worked with parents who could fit the Simon and Tibby bill. I knew social workers like Shannon and school administrators like Mr. Croft. I’ve seen kids fall through the cracks and poor decisions made on their behalf. I’ve seen what precedes events that become headline news and had to bite my tongue. I remain tight-lipped on so many news events, because it is never as black and white as the media portrays it and people think when making hurtful comments on articles and social media.

The work is difficult. It is emotional. It is exhausting. But it is worth it when you witness true change happening before you. When you see everything click into place. When they return several years later, young men and in college or working full-time, or they call you on the phone because they want to hear a voice they know that truly cares for them.

Posted by Debi Smith on August 21, 2015 in Uncategorized