Chaz and my uncles doing a little kanikapila

I grew up with music.  My uncles always played and sang for me when I was little.  They still accede to my repeated song requests when we are all together.  I remember falling asleep around campfires with them singing and playing.  For a long time, I needed music to fall asleep.  It relaxed me.  Except for when insomnia took over my body.  That’s a story for another time.

I sang in church choirs, worship teams, and did a few special music solos.  I even co-directed children’s choirs.  In 5th grade, a friend presented me with the opportunity to buy a used flute from a relative of his so I could join the band.  And by band, I mean there were about 10 of us learning how to play our respective instruments. 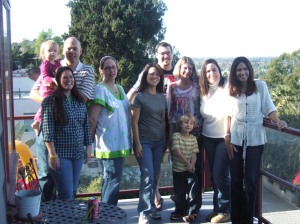 Me, Stick, and some fellow band geeks at our min-reunion in 2009

I kept up with it and stayed in band all through high school.  I wasn’t the best.  I wasn’t the worst.  But, I had a lot of fun.  Heck, I met my best friend in band.  What could be better than that?

I took piano lessons my senior year in high school and did much better than I expected to.  Playing the flute for 6 years gave me an advantage over my brother, sisters, and mother, who all took lessons at the same time.  My teacher didn’t have to teach me how to read music at all.  She just had to teach me how to read bass clef, which wasn’t that difficult.  I now have a keyboard which I’ll sit down at and try to plunk out some tunes.  I even tried to learn Bella’s Lullaby when I finally got my hands on the sheet music for me.

Playing music and singing definitely gave me a better appreciation for music.  Of all genres.  I admit I still have a hard time stomaching Country and Rap/Hip Hop.  I can do old school rap.  In my head, that’s real rap.  Not the stuff you hear these days.  There are a few gems in those areas though.  I know them when I hear them.

I dabbled with writing music with a couple of my friends during my college and post-college years.  Both of them were musicians and friends from church.  One of them I affectionately called, “My male self.”  Silver was just like me only he was a guy.  We were so alike, we could finish each other’s sentences.  This made writing music with him easy.  We were even in a short lived band together.  Like most bands, at least one ego got in the way and implosion ensued.

I love listening to music.  Like food, I have memories associated with certain songs.  Most of us do.  I get lost sometimes while listening to music.  I lose track of time if I have it on while writing, reading, or crafting.  If I’m just sitting and listening, I let my mind wander.  Last Summer, we were out to dinner with Exodus and H enjoying each other’s company and some Spanish food.  If I remember correctly, we all ordered some version of the restaurant’s paella.  Good stuff.  There was a live musician playing guitar.  After dinner, my mind was wandering with the music.  One particular song had me envisioning Russians chasing other Russians down a cobblestone road.  Inspiration for a poem?  I pulled out my little notebook and wrote down what I was thinking and put it away.  I haven’t had quite the inspiration to finish it out.

I completely love drums.  In marching band, I loved when our director would let our drum section do a fun cadence while we were marching.  There is some about cadence that I find mesmerizing.  Then, there is taiko.  Almost like cadence and just as mesmerizing.  We are fortunate to have seen several taiko companies at the St. Louis Japanese Festivals as well as local festivals in Kentucky and Cincinnati.  Blows me away every time. 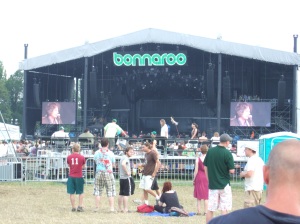 I’ve attended many concerts.  Not as many as some of your reading this or maybe more than some of you.  My first being Jan & Dean.  Great concert at the L.A. Zoo.  There was Van Halen for the OU812 tour for Stick’s birthday.  Good times.  I even braved Bonnaroo in 2009.  I really wanted to see Nine Inch Nails and Beastie Boys.  There was also Wilco, The Yeah, Yeah, Yeahs, and Lucinda Williams.  Chaz, Exodus, and Heath went to Bonnaroo together a few times before.  They were all about Phish.  I just had a problem with the group next to us toking every half an hour on the dot.  I’m not talking every 30 minutes after they finished one.  Every 30 minutes.  I told the guys that they either weren’t inhaling right or they had some bad weed.  That got a little chuckle.  The Boss was a big draw, too.  I wasn’t so impressed.  He came out with a bang, then lulled me for about an hour or so.  I was really close to falling asleep when he came back with some of his oldies, but goodies.  At least it was an experience I can say I lived through. 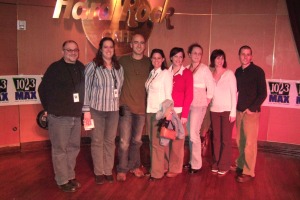 Me, Ed Kowalczyk of Live, and a bunch of strangers

I don’t consider myself a fanatic about any band (except maybe Duran Duran when I was a teen) or artist that I like, but I am a fan.  I don’t go looking for ways to get backstage passes or go out of my way trying to meet them.  Heck, I had a chance to meet Jason Scott Lee after seeing him in a local play back home but I didn’t want to come off as a crazy fan.  And I probably would have seeing as I nearly drooled over him during the entire play.  Back to my point.  I happened to win passes to meet Ed Kowalczyk from Live, 5 years ago.  The radio station I listened to in Louisville would put on loyal listener shows.  I happened to enter online nothing thinking anything of it because I had done so for other loyal listener shows and hadn’t won.  Imagine my surprise when I got an email saying I won!  There was supposed to be a meet and greet time, but because of Ed’s schedule, they changed things up.  He autographed all our passes ahead of time (a good thing since I left my CD in the car) and after the show we did group pictures rather than individual.  Lucky me got to stand right next to him.  He put his arm around me and so I put mine on his back.  Then the thought hit me, I’m touching a sweaty rock star!  That will likely never happen again.  So I enjoyed while I could.

I’ve seen Michael W. Smith a couple of times.  I always feel good during his shows.  The last time I saw him, I went with a friend and one of her friends.  I happened to get really good seats for the show and we were in heaven.  So close to the stage that we could feel the energy Smitty was giving off.  Jack Johnson is another repeat.  If you haven’t been to a show, it’s like a massive kanikapila.  The band is playing, he’s singing, and EVERYONE else is singing along with him.  It’s like being home.

Exodus, Chaz, T, & H aka The Mediocre All Stars

That’s what it always comes back to.  The music I grew up with.  Sitting around with guitars and ukes.  Totally unplugged.  It gives me joy that Chaz can join in on the kanikapila with my uncles.  He has an amazing voice which has me and our friends yelling, “BOOOO!  You’re not Chaz!” when we hear a song on the radio that he covers.  If anyone can do a song better than the original artist, it’s Chaz.  I’d say I’m biased, but I’m not the only one that thinks that.  He can belt out Like A Stone better than Chris Cornell.  In fact, when he was learning it, I sometimes had to close the door because it was driving me nuts.  We had a smaller apartment back then.  When he finally performed it on Second Life, he blew me away.  I could not believe it.  He’s wowed an entire live crowd at a benefit show.  The guys in the band said it was because the band before them was spectacularly horrible.  So horrible, I almost had to go outside until they were done.  It wasn’t simply because the band before was so off-key.  It was because they were so amazing.  Despite the name they gave themselves, they are anything but mediocre.  It’s a case of 4 humble guys just playing music together.

Music makes my heart sing and that is all there is to it.  Especially when it’s my loved ones singing and/or playing.

Posted by Debi Smith on April 15, 2011 in Uncategorized