RSS
← Asians Are As American As You Are
Understanding Antiracist Terminology →

Being Kind to Myself 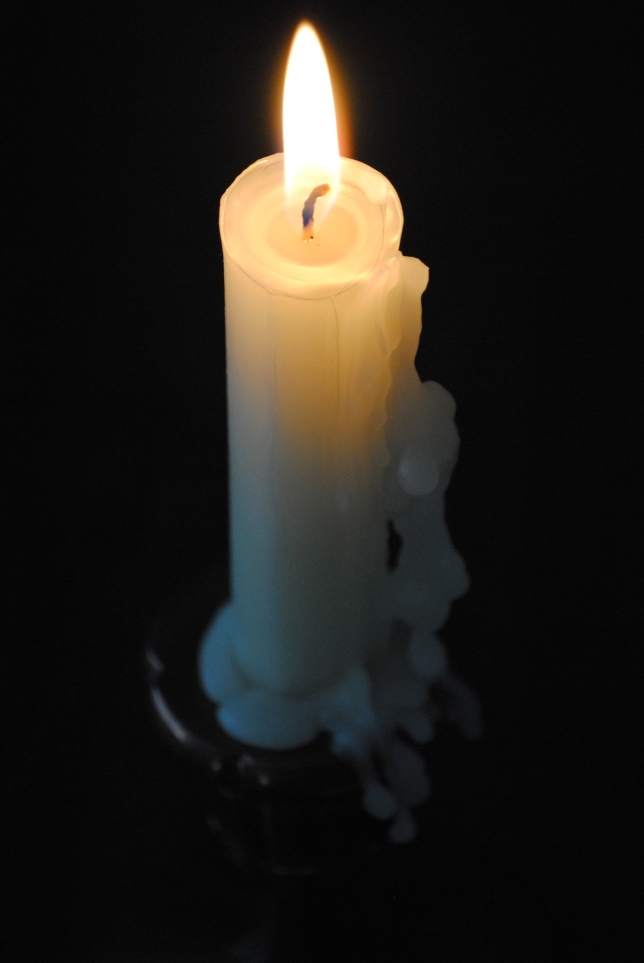 Chronic illnesses are assholes. My most current diagnosis happened just over a year ago and was a huge relief after years of reacting to weird things and nothing really making sense to me or my team of amazing doctors. However, this is a tricksy disorder. One that I can take all the meds in the world to prevent reactions but I might still have them if I already have an abundance of histamines floating around in my body and I’m exposed to a trigger. It’s also caused a lot of pain, inflammation, and brain fog that has made writing difficult. At the height of symptoms before the diagnosis, I could sit at the computer for hours and not write a thing, and not for lack of trying. I tried, but brain fog will mess you up. Not being able to think of the words I know as well as not forming coherent sentences will make any writer frustrated. I think I was beyond frustrated though. I was angry that I was unable to do what I love.

Then there were days where I was able to write and it felt like things were flowing, but then after spending a week on one scene alone I’d decide it was unusable. All that time spent on something that would not make it into the final manuscript. Talk about frustrating.

What was I doing?

I gave in. I stopped writing because the stress of being unable to made my mast cell disorder worse. Yeah, stress is a trigger. Good times.

We’ve been doing med changes one at a time and I finally got to the point where I could start writing again earlier this year. But I would be productive for a day and then nothing for a week. Rinse. Repeat.

Fast forward to a few weeks ago. After having a short period of productivity, I had a couple of weeks of not being able to at all again.

Have I mentioned the frustration and anger? 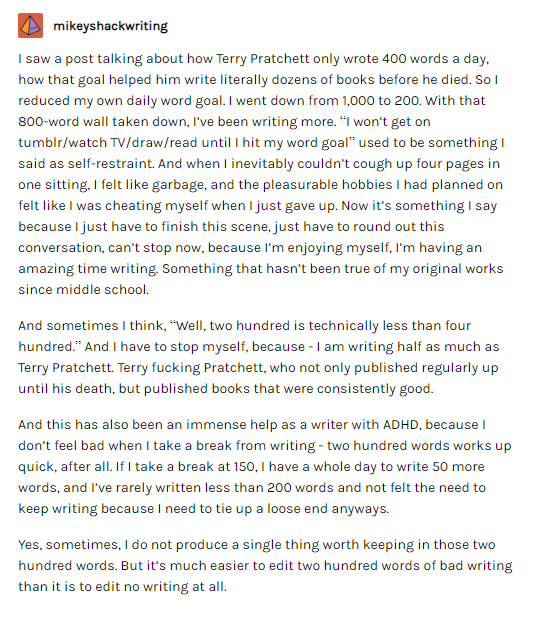 Image description: Tumblr user mikeyshackwriting: I saw a post talking about how Terry Pratchett only wrote 400 words a day, how that goal helped him write literally dozens of books before he died. So I reduced my own daily word goal. I went down from 1,000 to 200. With that 800-word wall taken down, I’ve been writing more. “I won’t get on tumblr/watch TV/draw/read until I hit my word goal” used to be something I said as self-restraint. And when I inevitably couldn’t cough up four pages in one sitting, I felt like garbage, and the pleasurable hobbies I had planned on felt like I was cheating myself when I just gave up. Now it’s something I say because I just have to finish this scene, just have to round out this conversation, can’t stop now, because I’m enjoying myself, I’m having an amazing time writing. Something that hasn’t been true of my original works since middle school. And sometimes I think, “Well, two hundred is technically less than four hundred.” And I have to stop myself, because – I am writing half as much as Terry Pratchett. Terry fucking Pratchett, who not only published regularly up until his death, but published books that were consistently good. And this has also been an immense help as a writer with ADHD, because I don’t feel bad when I take a break from writing – two hundred words works up quick, after all. If I take a break at 150, I have a whole day to write 50 more words, and I’ve rarely written less than 200 words and not felt the need to keep writing because I need to tie up a loose end anyways. Yes, sometimes, I do not produce a single thing worth keeping in those two hundred words. But it’s much easier to edit two hundred words of bad writing than it is to edit no writing at all.

I finally realized that part of what was blocking me was myself. Yeah. I was getting in my own way.

I wasn’t being as kind to myself as I thought I was. Because the kindness I was extending myself was overshadowed by a negative feedback loop playing in the background so softly it wasn’t recognizable.

Have you ever been listening to music on your computer and you’re opening websites to read articles, find recipes, or whatever and something feels off about the music, but you can’t quite put your finger on it but you continue, thinking maybe you’re imagining things? That’s been me for the last few years and pretty much every time I attempted to write.

Finally, you close some tabs and you realize that a video had been running on autoplay in one of those tabs and you think, “I’m not going crazy. There really was something else playing.”

After a couple of weeks of not being able to write (chronic illnesses are assholes) the last couple of weeks have been productive. Not wildly productive, breaking 1k word counts. More in the sense that I was able to write with a clear sense of where the scene is headed, how it needs to change from the original, and what comes next. One day after the last time I saw the Tumblr meme above I left myself a kind note with a reminder of what to focus on the next day. Seems like a no-brainer, yeah?

The norm is I write myself snarky notes, and anyone I’ve beta read for knows I can be pretty snarky. Not mean snarky, all in fun snarkiness. The problem with that is when I go long stretches without being able to write because of brain fog or pain or both I have to work extra hard to beat down negative self-talk as soon as it starts. Because what am I if I’m not productive?

That’s the problem with chronic illness. We’re socialized to believe our worth lies in our productivity and what we can provide others rather than we have worth because we exist. Everyone with chronic illness, physical and/or mental, can relate to that feeling of having no worth when we are physically/mentally unable to do anything. We see the glazed look in people’s eyes when we try to share our struggles, and so many of us end up struggling in silence to avoid that glazed look or the inevitable unsolicited advice that is nowhere near helpful. We extend kindness to others and don’t get the same in return. We have to be kind to ourselves which is a struggle in itself as well because it’s counter to negative self-talk. The instinct is to internally put ourselves down because we are worthless because we aren’t producing anything. It’s hard for us to see that we have worth just for existing because that’s not what we’re taught as we’re growing up.

So here I am. Leaving myself kind notes in my manuscript before I turn off the computer for the day. I’m better armed against said negative self-talk the next day. And by kind, I don’t necessarily mean being positive about everything. Not at all. I give myself praise. “Hey, you did great today despite having a rough start and feeling like crap.” Acknowledging the stumbling blocks and the fact that I was able to get around them has been key. Do I hit 400 words every day? No. There have been days where my brain just wouldn’t cooperate. For the most part, though, I’m hitting it and sometimes continue. Reminding myself that the day before there were things out of my control hindering my progress is what shuts down the negative self-talk. I can’t tell myself I was lazy when I wasn’t. I genuinely couldn’t function.

I wasn’t sure how my little experiment on myself would turn out. The worst that could happen was things stayed the same. But they didn’t. They’ve improved and I have to thank everything that pointed in the direction of mikeyshackwriting’s Tumblr post for it.

To those of you who are in this same struggle, you are worthy no matter what. You do not have to live up to society’s expectations to prove or keep that worth. It is yours and no one can take it away from you. Just remember to extend the same kindness to yourself that you grant to others.

Posted by Debi Smith on September 26, 2019 in Uncategorized

← Asians Are As American As You Are
Understanding Antiracist Terminology →